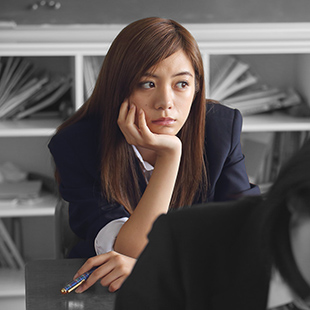 Recently, I had my first ever high school math final.  I’d studied hard, remained cool headed throughout the whole test and was feeling pretty confident. Then I got my marks back.

As I stared at that little number on the screen the feelings of horror, disgust, and disappointment rushed up my throat.  How could I have messed up that badly after trying so hard? That must’ve meant that I really was just stupid. Maybe I should have been more diligent with my homework- or maybe the school had accidentally mixed up my test paper with someone else…  The thoughts in my head went through numerous cycles of denial, anger and panic, before settling on the final destination.

It was Planet Disappointment, population: me.

This mark affected me more than I care to admit.  Even though I knew in some tiny rational part of me that one measly bad mark doesn’t matter in the long run I couldn’t shake the negative thoughts. One of the worst feelings in the world is achieving a bad outcome on something that you thought you had nailed down.  I sulked around for the rest of the day feeling horrible, and berating myself both for getting a bad mark and then for getting so worked up over something that I knew wasn’t important at all.

I sulked around for the rest of the day feeling horrible, and berating myself both for getting a bad mark and then for getting so worked up over something that I knew wasn’t important at all.”

Unfortunately, this wasn’t the only time a seemingly insignificant number has brought me down.

Last year at school, there was a short story project in English class.  Due to my simultaneously hungry and fragile ego, it was of utmost importance that my English teacher knew that I was good at creative writing.  Believe me when I say I worked my butt off for that story!  However, the first seeds of doubt were planted when I got to school, and discovered that several of my classmates’ stories were significantly longer than mine.  Did that mean they were more dedicated?  Skillful?  Creative?  I wanted to go home and edit my story again, make it longer, more exciting, and more meaningful.  I wanted it to stand out from the rest.

Then disaster struck.  When I got the story back, the rubric sheet was marred with a horrific 3 in one of the categories! (Our grading system went from 1 to 4, 4 being the highest mark).  I had gotten 4s in all the other categories, but this 3 overshadowed everything.  I felt like a failure, watching as my classmates flocked to congratulate one of my friends, who had gotten a perfect score.   I kept thinking, “That should be me.  Hello!  I’m a good writer too!”  But I immediately scolded myself for those thoughts.  I should be happy for my friend!  I shouldn’t seek or care about others’ attention.

The worst part of this was that I had nobody to blame but myself and that confirmed it… I just wasn’t good enough.  I also felt like my emotions were invalid since it seemed like I was getting way too worked up over a tiny thing.  Finally, I managed to calm down by telling myself that a single 3 on a single project did not mean I was a bad writer.  This one teacher didn’t think I was perfect, so what?  Maybe his taste just wasn’t my writing style.  But no matter how much I told myself it didn’t matter, I couldn’t stop caring.  It’s nearly been a full year since I got that 3, but I don’t I will ever forget it.

Hi, nice to meet you! I’m a perfectionist. Low self-confidence, harsh self-criticism and self-doubt are all things that I experience on a daily basis.  Despite knowing that (rationally speaking) I’m not really a failure at life, it’s hard to think sometimes. It’s also difficult to feel satisfied by the things that I have done, since there’s always the notion that I could have done it better. For example, this is probably the fourth time I’ve rewritten this paragraph.

Luckily, while I am a perfectionist, I am also self-aware and desiring to change for the better.  I know that perfectionism can be very unhealthy.  I know that if I want to move forwards, I have to change the way I think.  One quote that really speaks to me on this is “Doubt kills more dreams than failure ever will.”  The perfectionist in me sometimes prevents me from taking chances. It will paralyze me in fear of ‘getting it wrong’ or ‘not being good enough, but in reality that perfectionist mindset has done me more harm than ‘getting it wrong’ or ‘not being good enough’ has.

The truth is I’ve got to stop being so afraid of making mistakes and of moving in the wrong direction, because there is no such thing as a wrong direction! Just as long as you’re changing, growing, and learning.

Doubt kills more dreams than failure ever will.”

If I can change the way I think and learn to overcome the impossible demands of perfectionism then I can finally let these two incidents- the math final and the short story- become water under the bridge.  One bad mark on the math test doesn’t have to have the power to make me doubt my capabilities; one imperfect 3 does not determine the overall success of the years of hard work I’ve put into school and writing.

“Doubt kills more dreams than failure ever will” – unless you learn to fight against the doubt and embrace the failures, and that is exactly what I’ll be working to do.