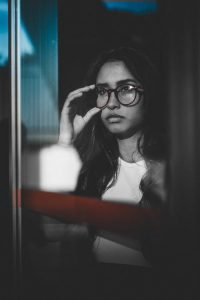 Being lonely was one of the worst feelings in school and I hated it. The worst part about it was that I didn’t know what I could do about it. Most people rejected my company. It wasn’t until later in the school year when people started joining groups that I was able to differentiate between the types of people at school and determine who I wanted to try and befriend.

There was the typical band group, jock group and so on. The group I wanted to be in was the cool group (shockingly), but for some reason being cool also meant being bad.

This group always came in late and marched into class together, sitting in the back, paying no attention to the teacher and the material being taught. They would skip class often as well.

In my attempt to make myself less of a loner I asked to join in, and to my surprise they agreed, but at a cost. I had to do exactly what they did and this ranged from skipping class to smoking at the back of school, all things I was uncomfortable with. But I wanted so badly to be a part of their group that I conformed.

At first, it was nice having people to talk to and I didn’t care about the consequences that came with it. All I cared about was having friends and being cool.

This mentality changed once my grades started falling and I started to panic.

I did want friends, but I also wanted good grades so the hamster on the wheel in my brain started to run. “Is this all worth it?” I asked myself. I went up to my friends to express my concern. I thought they would understand and listen to my concerns to but the exact opposite happened; they all laughed and insulted me.

“Are they really my friends?” is what I asked myself next. Just the fact that I had to ask myself that question made me come to the realization that they weren’t.

What did I do about it? I left the group. At first, they was not happy with my decision, but I understood what my priorities and I stayed strong in standing up them and making my priorities clear to them. I also hung around teachers for a while, as added protection.

You may not have been in the exact same situation as I have, but we have all experienced pressure from others in some form. Take the time to listen to your own needs, and act when things don’t seem right.

If you are dealing with friend issues and need some support, we are here for you, 24/7 through call, chat, email or text.