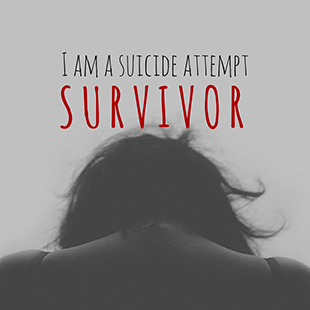 I am a suicide attempt survivor. I’ve been diagnosed with depression since childhood, and at the age of 15 my mental health had collapsed entirely. My best friend wouldn’t talk to me, my relationship with my parents was awful, school stressed me out, work stressed me out, and my boyfriend had dumped me.

This left me spiraling into a five day ongoing anxiety attack. In my head, the only things that cycled were the worst events of my life. I wasn’t able to sleep or eat. I wasn’t functioning. Within three days, I had attempted suicide twice.

Suicide has been described as one of the most selfish things someone could do, but in reality, I thought I was doing something so selfless. I thought no one would miss me, no one would care; I wouldn’t be burdening those around me anymore. It’s a horrific thought process, but the amount of hopelessness and despair that goes on in the mind of a suicidal person begins to defy any rationality.

Suicide has been described as one of the most selfish things someone could do, but in reality, I thought I was doing something so selfless.

The road to recovery began by seeing a psychiatrist and taking anti-depressants. Therapy taught me how to analyze myself, and how to use this knowledge to handle my depression and self-destructive thoughts.

I also started writing. Journaling helped me release the thoughts that were in my head, and clear my mind. I learned the importance of self-care, and my mental health became my top priority. During this time, I felt incredibly alone, so, if you are going through this, remember to reach out and talk to someone. It’s easy to shut people out, but letting people in is so important.

It took me a long time to be able to be okay, which I learned is okay too.

In a famous anecdote, a psychologist walked around the classroom with a glass of water and asked the class how heavy the water was. She began receiving different answers about the weight, but she replied saying that the amount of water in the glass was actually irrelevant and what mattered was how long she held the glass.

If she held the glass for a minute, it was fine. If she held the glass for an hour, her arm would begin to cramp. If she held it for a day, her arm would be numb and paralyzed. This is like stress. The longer you hold onto it, the more painful and damaging it becomes. Give yourself a break when you need it. Take some time to do something you enjoy such as taking a walk, painting, or taking a bath.

It’s been three years since my last suicide attempt, and my life is so different. It’s better than the life of the 15 year old girl who wanted to die could have imagined. I graduated high school, and I didn’t even think I would make it alive to bear through it. But even though I’ve come a long way, it doesn’t mean that I don’t still have dark days. Sometimes, I still have self-destructive thoughts, anxiety attacks, or bouts of depression, but I have the power now to know that I can make it through.

Are you struggling with thoughts of suicide? Talk to us, we’re here to help.