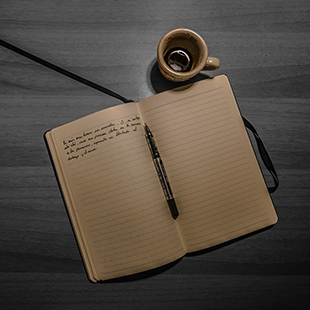 I’ve been writing in a diary for about six years now, and I think it’s a really useful way to express yourself. It’s not only a private place where you can express your feelings without fear of being judged, but it’s also a time capsule that preserves your thoughts so that you can reflect on them later.

I personally just write in my diary whenever I feel like it, and I don’t force myself to write in it if I have nothing to talk about. Whenever I’m having troubles with a friend or whenever I have an awkward moment with my crush or something, I’ll write about it in my diary. Usually, the types of things I write in my diary are things that I’m too shy to talk to other people about.

The useful thing about diaries is that nobody else will read them, so you don’t have to worry about what other people think.”

I think there’s a misconception about keeping a diary, which is you have to write it in regularly or else you’ve “failed,” but I’ve gone for months and months without touching my diary. If I had forced myself to write in my diary constantly, it probably wouldn’t be as interesting to read anyway. The length of your entries doesn’t matter, either: some of my entries are a few sentences long, and some of them can go on for pages and pages if I have a lot I want to talk about.

Your diary is for yourself, and nobody else, so there’s no need to force yourself to write more than you want to.

If you’re thinking of starting a diary, all you have to do is just get a notebook or journal, put it somewhere safe, and write in it whenever you feel like it. I would suggest getting a notebook that you like writing in, and using a pen or pencil that’s nice to write with. The key is that it doesn’t feel like a chore, and you look forward to it. It should just be your little space where you can say whatever you’re feeling without having to worry about what other people will think of it.

Personally, I like to write in my diary with nice ink pens, because they look nice and I like the way they flow as I write! Most of my entries tend to be 1-2 pages long, and my writing is really messy. Sometimes, I’ll tape things into my diary if there’s something I want to keep. The only “rule” I have is that I’ll just write the date at the top of each entry so that the diary stays slightly organized.

My diary serves not only as an outlet, but also as a time capsule.

I actually really like reading past entries, both the ones from years ago and the ones that I’ve written recently. It’s interesting to read really old entries just to get a glimpse of what I was like back then, especially most of my old ones are pretty cringey. It’s also useful reading relatively recent entries, too, because it can provide a little bit of perspective. And it’s really satisfying to just flip through the diary as a whole and look at all of the writing you’ve done over the years.

Overall, writing in my diary has been really fulfilling, and it’s a good outlet for things that I’m too shy to talk to anybody about. It might not be for everyone, but I would personally recommend trying it, because it’s worked pretty well for me! It’s nice because you don’t have to worry about what other people might think, and it can be a really meaningful keepsake for when you’re older.