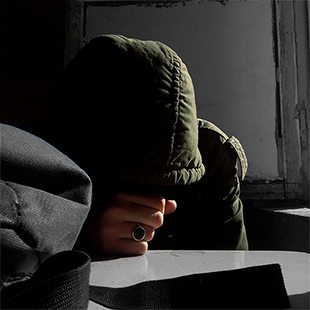 We’ve all been through it. Even if you yourself have never been suicidal, or felt the urge to self harm, chances are you know someone who has.

For me, helping a friend who felt depressed was almost harder than when I was depressed. I think this is because it’s a horrible feeling to feel responsible for a person when you have no control over what they do.

It’s one of the hardest things you will ever have to face when one of your friends tells you that she hates herself; that she doesn’t see the point of living. Usually this comes out of left-field for you, because here you are, looking at one of the people you love most in the world, and she is telling you that she doesn’t think she is worth it. The complete and utter shock that you feel is so intense, that you usually say the wrong thing ─you think─ or nothing at all.

So, maybe you walk away for a while and think things over.

The emotions that you feel are so mixed up and confused that it takes a while to sort things out. Or maybe, you react right away and tell your friend how much you love her, how beautiful she is, how talented and funny. All the while, you can see in her eyes that she doesn’t believe you.

When this happened to me, I went into Super Fixer Mode, where I did everything possible to fix the problems my friend was having: getting books out of the library, calling hotlines,  researching things on the internet, brainstorming with friends. I would talk to my friend, making plans with her, trying to figure out how she could get along better with her dad and trying to get her to talk to an adult about her cutting and her suicide attempts.

I even went so far as to offer to let her stay at my house for a while in order to get some space from her family. That is, until my own family nixed the idea because taking on a suicidal teenager they said was too much of a responsibility.

The problem was, while I was in superhero-mode, trying to fix my friend’s problems, I forgot to ask my friend just exactly how she wanted me to help. I assumed that by telling me about her cutting and her depression, that my friend wanted me to fix her problems for her. The reality was that she resented the way I was taking over her life, trying to solve everything for her.

All she really wanted was someone to tell her that she was loved, and someone to listen to her think out loud.

She told me that the only help she wanted was someone to talk to.

Sometimes the hardest thing to do is just shut up and listens. Sometimes that’s all we need to do.

That being said, if you have, or had, a friend who’s suicidal, you’ve probably heard, “but you have to promise not to tell anyone,” or, “don’t tell any parents or teachers because they just don’t get it.”  When you say that you promise you won’t tell anyone, you know in the back of your mind that this isn’t something you should be agreeing to.

All of your life, you’ve been told that if you have a friend who’s having troubles, you should tell an adult, and here your friend is, asking you to go against everything you have ever been taught.

But you agree anyways, because that’s what friends do; you keep each other’s secrets and protect one another.

This is me telling you that it’s okay to break that promise.

I didn’t tell anyone when I knew my friend attempted suicide. I carried that thought around with me everywhere, wondering what to do. In the back of my mind, I knew that telling a counsellor at school was the best option. My entire life, and I know this isn’t true for everyone, but I’ve trusted the adults in my life. I was always the one to stay after school talking to teachers, and when I went home, I would tell my mom about my day.

All my life, I have been fortunate to have an adult in my life to trust, and here my friend was telling me I couldn’t go to them for help. According to her, parents, teachers and counsellors were not only useless, but they were also not to be trusted. All they would do is send her to the hospital, and was that what I wanted? She hated them, and that was that.

In the end, the second time in little over a month that my friend attempted suicide and also started cutting again, I told my school counsellor. Ultimately, I decided that I’d rather have a friend who was mad at me and never talk to me again, than a friend who was dead.

I’m not going to lie. Telling the school counsellor didn’t help much at first. As far as I could tell, all I had was a friend who was pissed at me, and a counsellor telling me that I should have talked to her sooner. Gradually, though, small things changed. The school, now being aware of my friend’s problems, became more involved. More teachers kept an eye on her, making themselves available to talk to her. Some teachers even made sure that she was eating healthy and taking care of herself. My friend’s dad, of course, was notified by the school and my friend went back to her psychiatrist and back on anti-depressants.

It wasn’t a quick fix, and nothing is perfect.

One more suicide attempt, a lot of cutting, and one hospital stay later, my friend is finally doing better. Even though I betrayed her trust, my friend eventually saw that I told someone because I loved her, not because I wanted to betray her. She forgave me and came to trust me again. Because I told someone, my friend was able to establish a support system much more dynamic and effective than a single teenage girl who had no clue what she was doing.

I learned a lot that year. I learned that sometimes all you need to do is listen.

I learned that when a friend tells you that they want to kill themselves it is not a grab for attention. It’s just that your friend doesn’t know how to get better on their own, or they are not at the point where they can accept help. I learned that sometimes breaking a promise is the best thing you can do, and that I didn’t have to shoulder everything alone.

Remember to just take a deep breath and relax.

You’re allowed to make time for you and to take care of yourself. In fact, you probably won’t be able to help your friend unless you do. Just know that you are being a good friend, and that you are making a difference. Hold on to that.