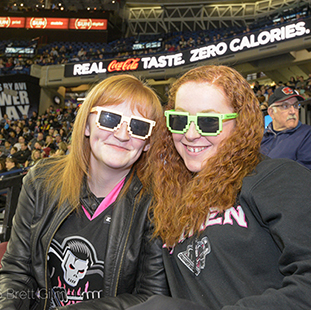 On Sunday, March 20th, the Calgary Saddledome hosted the Calgary Hitmen vs. the Kootenay Ice in the last game of the regular season. I had the fortuitous opportunity to attend the game with the company of my good friend, Sophia, thanks to ConnecTeen!

Back in November, I had the wonderful opportunity to chat with Vanessa De Souza from ConnecTeen for a post for the Youth Are Awesome blog. A few weeks ago Vanessa approached me about attending the game, and I couldn’t pass up the opportunity.

Since 2010, ConnecTeen has held their Hitmen Game Fundraiser at the Saddledome. The fundraiser is successful in highlighting what ConnecTeen has to offer to the youth in Calgary in a fun and engaging way.

The end of season awards took place that same afternoon, with Radel Fazleev being the lucky recipient of the player of the year award.

The cheers and applause could be heard throughout the arena as each player went up to receive his respective award.

Now in it’s second year, ConnecTeen hosted a youth video contest. In a follow up from my past article where Vanessa and I discussed the contest, I am pleased to announce that the winner of this year’s contest was Haseenah. She had the wonderful opportunity of celebrating with nine of her friends in the Coca-Cola box suite at the game. During intermissions, her video could be seen on the jumbotron in all it’s creative glory. I for one was very much impressed in the genius of her idea, which you can view here.

ConnecTeen had a pretty exciting contest running on Sunday with two ways of entering. ConnecTeen’s Face in the Crowd contest asked participants to follow them on either Twitter or Instagram and snap a selfie wearing their sunglasses with the hashtag #faceycc for the chance to win one of two C of Red giftcards. Or, you could get your photo taken by Gilmour Photography with your sunglasses on and be automatically be entered for a chance to win a a Nikon Camera donated by the Camera Store.

The game went into overtime, with a tie of 5-5. Nearly everyone in the stadium was on the edge of their seat, anticipation clear as day as they hoped the Calgary Hitmen would seize the win. After entering a shootout, Jakob Stukel was the lone individual who managed to reach the back of the net, scoring a 6-5 win. My friend and I were relieved as we relaxed into our chairs. We didn’t want to be disappointed going home, and let me tell you: the game did not disappoint in any aspects.

In all, the Calgary Hitmen game in support of ConnecTeen was a fun filled afternoon, full of exciting entertainment both on the ice and off.

Upon reflection, I’m looking forward to next year’s ConnecTeen game. The fundraiser is great at making youth feel included in Calgary’s community and reiterates the fact that you’re never alone, despite what you may be thinking or feeling.