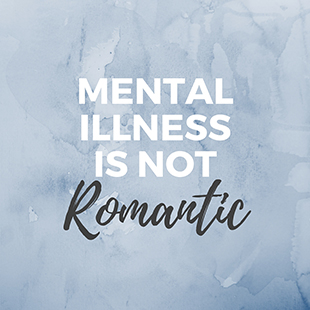 The constant battle between mental health and the stigma surrounding it is a struggle that many deal with every day. The media has force-fed us glamorized shots of pill bottles gracefully falling out of people’s hands, portraying those suffering with schizophrenia as crazed killers, and generally misrepresenting what disorders actually are. These portrayals are harmful to society and especially to those with mental illnesses.

Tumblr is filled with famous artwork with depressing slogans emblazoned across them, poems idolizing alcohol and pills as a means of escape, images of self-harm in black and white, or of stick thin girls with a pro-eating disorder caption underneath. In these instances, an attempt to decrease the stigma, to talk openly about mental illness, has resulted in glorifying it.

The stigma is still ever-present and damaging. Labeling people by their disorders is another common stigmatization.

The labels associated with mental illness are that the person is insane, unstable, lazy, attention seeking, etc. in order to lay blame and oversimplify a complex disorder. Disorders have also become attributed to being in a bad mood or having a negative quality that trivialises the reality of having a mental illness. Someone who is sad may claim they are depressed, someone who has a short attention span might declare themselves “ADHD,” or someone might joke that they have OCD because they’re very tidy.

On the flipside there are those who dismiss these disorders and emotions as non-existent or exaggerated. Someone might say that anxiety disorders are people being oversensitive, or that depression is merely a phase. This minimizes mental illness. These attitudes towards mental illness also clash with the attitudes of physical issues. Unfortunately, it is more socially acceptable to call in sick rather than to say that your depression made it difficult to get out of bed. A dentist appointment is easier to announce rather than stating you’re seeing your psychiatrist. This creates a false superiority of physical illness over mental illness.

The harm caused by these attitudes are detrimental to both mental health advocates and those against it. It fuels ignorance and dismissive attitudes towards mental illness. It makes having open discussions on the subject difficult and instead encourages stereotypes. Due to this, less people seek treatment and are ashamed to talk about their struggles. Mental illness becomes perceived as a temporary problem that will go away on its own. Those suffering from a disorder become scared of being dismissed, declared attention seeking, or being given special treatment by those around them.

We need to work together to stop the perpetuation of these attitudes and have open conversations instead.

One if five people will be affected by mental illness in their life. Awareness and knowledge need to be a widespread. We need to reject negative judgements, and encourage open-mindedness, empathy and validation. Let’s talk.