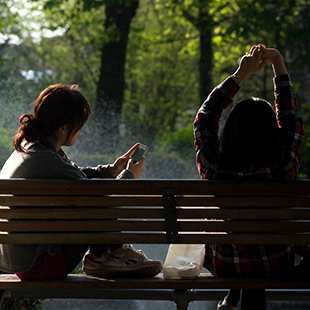 My friendships are a safe haven – a place where I can relax and laugh and where I can cry when times get tough. I look at my close-knit group of friends as my second family, and each one of us is a piece of a puzzle that is so well connected, we are basically inseparable… or so I thought.

Growing up, I had my fair share of friends, and as time passed, sometimes, so did my friendships, but I bounced back quickly and found others. This specific set of friends happened to form during the sixth grade, a group of 6 individuals who were complete opposites, but in our group, those differences only made us stronger.

Through the years we had our fair share of fights, and we went through rough times, but we always came back. During the last two years of junior high, we endured many disagreements that we had trouble bouncing back from.

I slowly watched as a close friend of mine began to drift away from our circle.

I know now that this occurrence is quite normal for teenagers, as I have watched many of my other friends mingle with other groups. But at the time I was hurt. I was especially close with this friend, and I did not know what pushed her to leave.

Confused and angry, I ranted to the remaining members of our friend group. Eventually our friend began to seek out our group again, but only a selected few. Soon I was the only one left in the dark. Watching my friends talk and share secrets with someone who used to be my best friend began to fill me with insecurity. In turn, I resorted to anger and hatred.

I love to write, so I turned to my words as a form of release and wrote various poems through social media to expose the thoughts that I was too afraid to say. My words weren’t intended to harm but meant as a form of release, mainly asking her to talk to me and sort out what went wrong. Through this whole ordeal my friends were torn, but none of them chose sides.

It grew frustrating watching them show both me and my now ex-friend support and selfishly, I started to want their friendship all to myself.

That jealousy sparked more words between my friend and I, more indirect conversations typed up online, each one harsher than the last.

Then it just ended. Why? I don’t know. Maybe it got old, maybe we matured. The words stopped altogether, the posts became a thing of the past. But the silence grew irritating, and with that only connection severed, I grew lonely and empty. I had lost my friend all over again.

Soon after, I started trying to talk to her again, trying to repair the friendship that had slipped through my fingers.

This sparked the year and a half of awkward smiles and constant avoidance. I remember crying from frustration trying to repair something that was 6 feet underground. I still stayed with my friend group, but I could see they were getting frustrated being stuck in the middle of never ending tensions.

Those two words were repeated to me over and over during this time. And through time, tensions faded away. It wasn’t the same old jokes and friendship we used to have, but we could look at each other without shifting our eyes away. Soon, those slight acknowledgements evolved into awkward jokes, and complaints about our classes.

My friends encouraged us, starting conversations to get us talking more until they stopped feeling obligatory and they became something that we wanted to do.

However, our friendship isn’t the same as it was before- it doesn’t have the same comfort and love it had before. It hurts knowing we threw that all away, but at the same time I’m glad we repaired the major damages.

I consider us “new friends” rather than old, because we restarted our friendship as strangers. I hope one day we will be able to reach the level of friendship we had before. I know it won’t be exactly the same as before, but I hope it’ll be stronger.