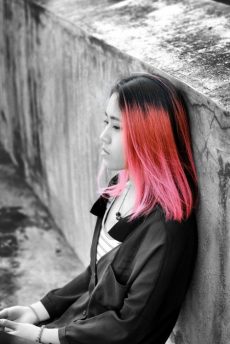 I have faced verbal abuse for the majority of my life. My father would tell me that I was fat, dumb and unattractive, and he would often point out my flaws. When other kids would come over, he would tell me “she’s so much prettier than you” or “she’s smarter than you”, or “she’s taller than you.”

I would be asked what I did wrong and why things were my fault. He would mock me and berate me, and I became accustomed to this. He found amusement in angering me and didn’t realize the damage he was actually doing. I learned this mantra of “you are not good enough”.

This damaged my self-esteem and my confidence. I became my harshest critic and would constantly re-evaluate and second guess myself. I became depressed and weight obsessed, and this took more of a toll on me than I realized.

At first, I would fight back.

If he said something to me, I would argue with him. This became the equivalent of fighting fire with fire. It would just create a volatile situation and nothing would get solved. Afterwards, I became passive; I would sit there and I would take the abuse. I wouldn’t say a word and I would let my father yell at me as much as he wanted, but this was also damaging. I felt powerless and it was aggravating just letting someone abuse me like that. It made me feel weak.

When this happens now I just leave the house.

If I feel an argument coming on, I try my best to get out of the situation like go to the library, go to a friend’s house or take a walk around the community. If you are dealing with verbal abuse, it is important that you find a solution that works best for you. Personally, leaving the situation is what worked best for me, but it may not be suitable or work best for your own situation.

If I feel an argument coming on, I try my best to get out of the situation like go to the library, go to a friend’s house or take a walk around the community.”

It took me a long time to recognize my situation as verbal abuse. As someone who is aware of social and inequality issues, it’s incredibly difficult to realize that you’re a victim. I never wanted to declare it as verbal abuse, as placing a label on my situation defined the severity of the problem. However, it is important to acknowledge it for what it is, so that you have a better understanding on how to deal with the situation.

So, what is verbal abuse?

If you are a victim of verbal abuse, it is important to get help and reach out to another person. Victims of verbal abuse are subject to depression, post-traumatic stress disorder and self-esteem issues. If you are being verbally abused do not blame yourself. It is not your fault. It is the fault of the person abusing you. Just remember, you are a strong and worthy person and most of all… you are loved.

Are you struggling with verbal abuse? Talk to us, we’re here to help.