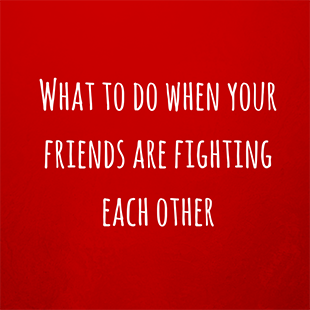 Has this every happened to you? Your friends get into a fight you had nothing to do with so you become the neutral ground. The problem with being neutral is that you are then seen as someone who can be influenced and claimed by one of the fighting sides, and that is EXACTLY what your friends try to do.

Being in the middle is a very difficult situation, it seems as if you can only choose between the extremes. You can choose one friend and risk getting the other friend upset and vice versa or you can choose to remain neutral and risk both friends being upset.

I hate being in the situation mainly because I know the issue can be fixed if both friends take the time to talk about their problems… and that is exactly what I did when I was in this situation. Here are some steps with you that helped me in this situation.

Let them cool off

Giving each friend some time and space to settle down is crucial because if you talk to them at the peak of their anger, things might not go so well…

Let them vent to you

The worst thing you can do is be biased and label one friend bad while the other good. It’s always great to get both sides of the story to get a comprehensive picture of what happened that led up to the fight. Plus, this shows that you’re being a friend and taking the time to listen which shows a lot of care.

Try asking them if they are willing to talk to the other friend. Ask them how they feel about it, instead of insisting that they should do it. Letting the friend come to the decision themselves is a good indicator of whether or not they are ready to talk or even want to save the friendship. The last thing you want is to be faced with more resistance.

Be firm in your neutrality

If they’re still unwilling to try to work things out, it’s okay! You can’t always fight someone else’s battles and fix their problems. If worst comes to worst, take the time to let them know how you feel about being made to pick between the two of them. Let them know that you care about both of them and if they can’t work things out, you still wish to be friends with both of them, even if it means being friends separately. If you’re willing to take the time to listen to your friends then they should be able to do the same with you.

This can lead to other issues, trying to balance your time between two friends who don’t get along can be tricky. But it’s better than regretting losing a friend because you picked a side in a fight.

Need to talk to someone about friend issues? Contact ConnecTeen by phone, text or chat to speak with one of our peer support volunteers.