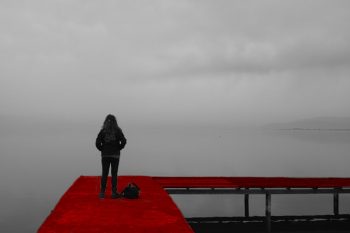 Suicide is a serious problem in our world today, especially for youth.  According to the Canadian Mental Health Association, suicide is the second leading cause of death for Canadians ages 15-24, and in a 2015 CDC study, it was found that 1% of high school students think seriously about suicide.

Some common factors that contribute to suicide and suicidal thoughts include: mental illness, feeling unable to cope with changes or events that have occurred, pain and inability to cope with it, and hopelessness for the future.  Youth are an especially vulnerable group because this is a time in our lives when everything is changing at unprecedented speeds- mentally, physically, emotionally, and externally- and this can be difficult to handle.

However, for such a widespread issue that affects so many people, we don’t really seem to talk about it much.  For me personally, my school has held many presentations and provided many resources for things such as cyber safety, sexual health, and dealing with stress, but has never tried to start a conversation among students about suicide.  Even among my friends, whenever we talk about our problems, we rarely discuss suicide in depth.

Even among my friends, whenever we talk about our problems, we rarely discuss suicide in depth.”

The truth is, suicide is not an easy topic to tackle.  Different people have different sensitivities regarding it, and it’s hard to gauge exactly what it is ‘okay’ to say about it and what isn’t.  Due to the lack of discussion, there isn’t much understanding about suicide, which means that misconceptions and stigmas are perpetuated.  Unfortunately, this silence is actually very harmful, as it allows untruthful and dangerous myths to continue existing.

How Do We Talk About Suicide?

Calm, open, non-judgmental discussion about suicide can increase awareness about it, as well as help those considering suicide feel understood and less alone.  The more we have non-judgmental, open-minded conversations, the less stigma there will be surrounding suicide. The more comfortable people are speaking about it, the more likely they will be to reach out and get help, or to help others going through what they’ve experienced themselves.

It’s definitely not easy to talk about suicide, but there are a few things to keep in mind that can help make the discussion less stressful.

1) If someone comes to you wanting to talk about suicide, the first thing to remember is to be a good listener.

This means letting them do the talking at their own pace, attentively listening all throughout, and being open-minded and empathetic.  If you feel overwhelmed or uncomfortable as a listener, it may be a good idea to direct that person to a professional or a hotline (like us).

2) If you yourself wish to talk to someone about suicide, it’s a good idea to start by sharing your feelings with someone that you trust, such as a family member, friend, or professional.

It’s okay if whoever is being confided in shows a strong reaction at first; they may just be shocked/surprised by the topic itself, and it doesn’t mean that they don’t care about you or want to shame you for talking about it.  Once again, it may be a good idea to talk to a professional or a hotline, as these people are specially equipped to discuss topics such as these and can really help you.

3) If suicide comes up as a topic in a conversation, be calm, open-minded, and honest.

Don’t use stigmatizing terminology, and refrain from supporting stereotypes and stigmas. Don’t talk about methods of suicide; instead, focus on your own feelings and thoughts surrounding it. Engage in informed, progressive discussion about suicide, as well as alternative ways out of suicide-involving situations, and resources such as hotlines and other organizations that can help.

There is nothing ‘wrong’ or ‘shameful’ about suicide or discussion of it.  You are never alone.  There are lots of people who will help you- in person, over the phone, or online.  The most important things are increasing discussion, getting help, and increasing suicide prevention; this can all begin with constructive, open conversation.

If you need help on how to talk about it, what to do if a friend is thinking of suicide, or if you yourself are having thoughts of suicide, contact ConnecTeen for support.