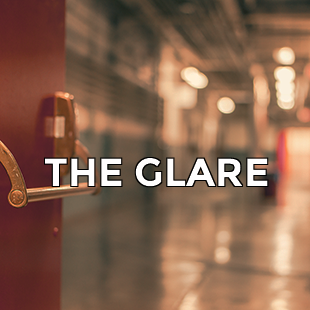 Getting into fights with friends and ending friendships on bad terms is a difficult thing to go through. And unfortunately, it’s a pretty common experience.

A once close relationship ends and suddenly you hit the war zone where they’ll throw an insult your way so you retaliate by throwing one back. You go home and talk with other friends to refuel so that when you meet again you’re ready to fight.

When you’re not in close proximity, you try to put them at a disadvantage by talking negatively about them to almost anyone who will listen so you can gain allies and they can lose theirs.

The worst part about these fights was walking past them in the hallways. You know why? Because despite having no contact at all, there was this enormous tension between us. It felt as if the heat had been turned up and gravity had gotten stronger. All of this happened because of one thing…

It’s very powerful. It feels like two daggers when you make eye contact, but avoiding eye contact feels even worse. You can feel their eyes on you but you can’t see it. It then becomes this unseen power. So seen or unseen it is very deadly. The glare is especially intense because you can communicate these strong emotions of anger and resentment despite not saying a word to each other.

The glare symbolizes everything that has ever gone wrong in your past relationship and wraps it all up in a nice little package. This package is paired with a couple lovely side effects like feeling extremely hot and sweaty.

I dreaded walking past them in the hallways more than the actual confrontation. With confrontation you can fight back, but glares are never matched.

Over time, this interaction made me feel extremely fatigued and emotionally drained. Feeling the intensity of the glare every time I walked through the halls really affected me negatively, and soon I grew so tired of this constant conflict that I didn’t want to go to school anymore. I could see my fatigue affecting my relationship with current friends because I no longer wanted to hang out or talk as much to them.

My younger brother told me that the same thing happened to him but I’m quite jealous of his outcome. Despite the glare, he was completely happy and content with his new friends and the resentment from his old friends didn’t overly bother him. I was completely perplexed as to how he’d pulled this off.

He gave me some advice I wish I had heard when I was younger. He told me that there is a reason you’ve ended your friendship with this person or group of people and if you feel like the reason isn’t worth ending the friendship(s) then you should do your best to mend the relationship(s).

However, if you feel that ending the relationship(s) was the right thing to do then let the glare happen and just move on. The glare is only something that will affect you to the extent you allow it to affect you. My brother chose to not let it affect him because he felt confident that leaving his old friends behind and focusing on his new friends was the right thing to do.

Of course, it’s normal to have mixed feelings about a friendship ending. There must have been some good times if you were ever friends in the first place. But you need to weigh the good against the bad and decide whether the friendship is worth trying to repair.

If you decide to move on, focus on your new friends and the good things in your life, and pay no attention to your old friends.

Your old friends will see what little effect their glares have on you and eventually they’ll move on with their lives too.

Who knows, maybe with time you’ll even be able to be civil with your old friends again, and the glare-off can end once and for all.

I’m very proud of my younger brother’s choice to choose his health over keeping grudges, it is something I wish I had done when I was in his situation.

Are you fighting with someone and need some support? Talk to us.